Jean Stampe and Maurice Vertongen met in the Belgian Air Force during the First World War and in 1923, they formed the Stamp and Vertongen (SV) Company at Antwerp. In1933, Jean Stampe flew the first prototype of the SV-4, designed by George's Ivanoff. The Stampe was designed as a trainer and won a contract to supply the Belgian Air Force with 300 aircraft during 1939 follow d by an order from the French Air Force for 600. At the outbreak of World War II, 40 aircraft had been produced in Antwerp and by Farman in France but the only aircraft to survive the war was OO-ATD which was flown by two Belgian pilots to England during 1941.

After the war, the French manufacturing company SNCAN produced 701 SV-4A Stampes powered by the Renault 4P engine at their factory Chatillon sous Bagneux on the river Seine. Jean Stampe with Alfred Renard produced 65 aircraft for the Belgian Air Force, powered by the De havilland Gipsy Major engine, the SV-4 B and C model and 150 aeroplanes were produced in Algeria by Atelier Industrial de L'air. Stampes produced with a Renault engine but later reengineer with a Gipsy Major were known as an SV-4C/G.

The Stampe became a stalwart of aerobatic competitions both in France and the rest of Europe and was much loved for the harmonised, light and effective controls. Although the Stampe differs significantly from the Tiger Moth in having a tail wheel, reasonably effective brakes and an extra set of ailerons to provide increased roll rate the aircraft are still confused by the casual observer but to fly, the aeroplanes are chalk and cheese. Possibly the most well known Stampe airshow act was that of the Rothmans Formation team that operated 4 Stampes during the early 1970s prior to changing to the Pitts Special and the legendary Neil Williams who came 2nd in the final Lockheed Trophy flying an SV-4C, G-ASHS.

The Stampe Team are proud to have been featured in January's 70th anniversary edition of the Aeroplane magazine ............

The Stampe Team are proud to have been featured in January's 70th anniversary edition of the Aeroplane magazine in a 7 page article. The article is accompanied by some superb air to air photographs taken by renowned photographer, Darren Harbar, from a friends Cessna Bird dog at old Warden towards the end of Summer 2021. Chris Jesson and Stu Goldspink are interviewed and the article tells the story both of the team and Stu's Stampe and it's special relationship with his family. A copy of this magazine would give an excellent insight into the team and also some fabulous images.

Our thanks go out to both Darren and Ben Dunnell from the Aeroplane.

We are delighted to announce that Richard Meredith, an experienced formation and aerobatic pilot, has agreed to join ............

We are delighted to announce that Richard Meredith, an experienced formation and aerobatic pilot, has agreed to join the team. Richard brings with him decades of formation experience having lead the Turb team for many years and also a wealth of knowledge as an aerobatics instructor at the Tiger Club. Richard is a share holder of G-OODE based at Headcorn and so the aeroplane line up will remain the same.

Stampe SV-4C, serial number 1101 was produced under licence by A.I.A D'Alger in Algeria in 1949 and flown by the Armee de l'air until transferred to the Aeronavale branch at Khouribga in Morocco.

1101 was then donated to various flying clubs in the South of France at Cuers and Mazamet being registered F-BGJM and eventually being transferred to Oyonnax, near the Swiss border where she was used by the Aeroclub Jean Couty. 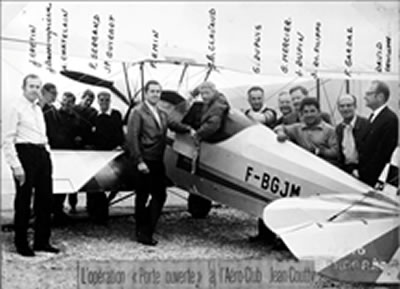 In 1972 she was bought by Paul Yarnold, then a BUA Captain and flown to Southend where she was re-registered G-AZNF. 1101 was based at Shoreham and Redhill aerodromes until her last flight for quite a while in May 1975.In August 1987, after a lengthy and considerable re-build and re-registered as G-HJSS, 1101's new owner, Mr John Smith, christened Hugh hence the registration, had the aircraft flown on an air test for its Certificate of airworthiness. John then proceeded to learn to fly on the aircraft eventually gaining his private pilots licence in July 1997! John changed the original 4PO3 engine for the more capable 4PO5 with an inverted oil system and hence the title SV-4C(Modified). 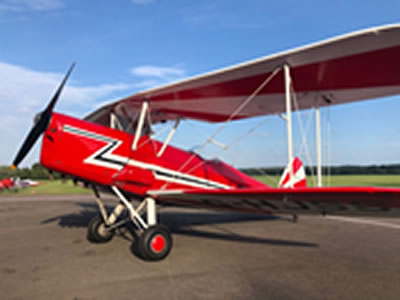 In November of 2019, John, at the age of 84, had decided to give up flying and the current owner, Team leader, Richard Ward, bought G-HJSS and moved her to Redhill aerodrome where she now resides.

Stampe G-OODE has long been associated with the Stampe Formation Team, flown most recently by Bill Merry. SV-4A c/n 500 is yet another SNCAN manufactured example from 1947 which after military service was sold on to the French civil register as F-BDGI.

Here it became the mount of celebrated aerobatic pilot Marcel Charollais from 1963 before being converted to SV-4C standard by SNCAN in 1971 and sold to Edward Woods in 1972 as G-AZNN.

From here it passed into the hands of aerobatic luminaries Richard Goode and Vic Norman (Aerosuperbatics) as G-OODE before passing through other hands until the first G-OODE Flying Group was formed in 1999.

The aircraft has been very much identified with Tony Calvey until his untimely death in 2014 and the celebrated heli-recovery of the aircraft from a Kent field in 2012 can still be viewed on YouTube. G-OODE is jointly owned by six vintage aircraft enthusiasts and remains at Headcorn, its home base for many years.